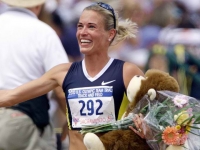 Details about the book, to be published by HarperCollins imprint Dey Street Books, are scant beyond the title and publication date.

In December 2012, The Smoking Gun reported that Favor Hamilton was working as a paid escort. After the revelation, Favor Hamilton lost several sponsorships, including ones with runDisney and the Rock 'n' Roll Marathon Series. In addition, Favor Hamilton's name was removed from the annual award for the top female athlete in the Big Ten, the Midwest athletic conference that the University of Wisconsin, where Favor Hamilton was a nine-time NCAA champion, is part of.