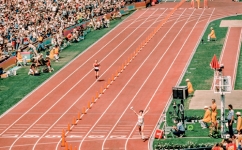 A hush fell as the stadium's giant screens showed her entering the tunnel. For a few seconds she was invisible to the waiting crowd, and to the world at their televisions. Then she ran out of the dark tunnel on to the track, a tiny unlikely figure in her oversized white cap, but still bouncy, confident, and strong after 26 searing miles. And the crowd roared.

That moment on August 5, 1984, as Joan Benoit Samuelson emerged into the sunlight of the Los Angeles Olympic stadium, was the perfect symbol for the final full acceptance of women's running. Even more than a symbol, the message she gave as she moved from obscurity to acclaim triggered a transformation that 30 years later is still gaining momentum. That was the moment when women's running worldwide moved from the margin to the mainstream.

As with all such key moments in history, it was made seminal by a conjunction of factors – when, what, where, who.