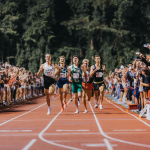 The 8th “Miler” returns to its standard first Friday night spot on August 5 at the Cardinal Gibbons Track, where the event got its start with the Sandman Mile in 2013.

The Men’s Elite Field is highlighted by 3 Olympians, 5 athletes looking to break 4 minutes for the first time, and new professionals, including 2020 U.S. Olympian Yared Nuguse. While attending Notre Dame, Nuguse set the NCAA Record in the 1500 meters (3:34.68) at NC State’s Paul Derr Track at the 2021 ACC Championships.

Broadcasting legend Larry Rawson and 2016 Olympian (and the 54th American woman to break 4:30 in the Mile) Colleen Quigley will be in Raleigh to broadcast the event on site, and will attend events surrounding the 2022 Sir Walter Miler.

The Sir Walter Miler is free and open to the public and will be broadcast live on RunnerSpace.com.

Up-to-the-minute Race Day information can be found at SirWalterMiler.com/2022-info and on the Summer of Miles podcast, which is posting daily episodes leading up to the event.

On will be sponsoring an on-field tailgate at Cardinal Gibbons at 7:00pm, with free On swag, games, food and beverages, while they last. There will be food trucks in the parking lot and LMNT will be providing free samples for fans that come early.

The 2022 Sir Walter Miler weekend will consist of events from Wednesday through Saturday, starting with a free track meet at St. Augustine’s and an Athlete Panel on Wednesday night at Runologie.

Saturday morning is the traditional “Run with the Pros” at Umstead Park. On Saturday night, the Raleigh RunDown Downhill Mile will be held on Centennial Parkway, followed by awards and a post-race party at Trophy Brewing on Maywood.