Trials of an Unlonely Miler 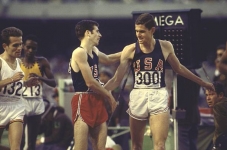 As the XIX Olympics began, America's best hope in the 1500 meters found himself so besieged that he had to leave the Olympic Village and train on quieter public highways to get ready for his stern ordeal

They were starting to come through the track barricades after him, and everywhere Jim Ryun looked a camera stared back at him. In warmups he was running through a litter of newsmen and photographers—a UPI man here, a Reuters man there—all seeking to record his special agonies. In the Olympic Village bands of people buzzed around him, in some cases tugging his shirttail right out of his pants, and when he stopped to talk to friends the people kept going round and round him like satellites.

All this attention is understandable, although it would be easier to understand if Jim Ryun had the star quality and perhaps the look of eagles of a Bob Seagren, who vaults, or that cool, excuse-me-while-I-go-win-a-gold-medal stance of Mark Spitz, who swims. What Ryun has is a sort of Bambi-revisited look, big dark eyes behind black-rimmed glasses, a lean body all loosely assembled, a polite frown, the head thrust forward earnestly. But now, in these terrible days, Ryundays, Jim Ryun is having superstar quality thrust upon him.

This is because he runs very fast, as everyone knows: the Mile in a world record 3:51.1, the 1500 meters in a world record 3:33.1. And perhaps part of the reason why people are so drawn to him is that he looks magnificent doing it, so full of aloof, lonely pain with every step. When Ryun runs, the world runs right along there with him. In the past year people have come to suffer along with him, too: through injury, through mononucleosis, which he had this past spring, and through the bleak period of fighting back. And now he is the mainstay of these XIX Olympic Games so far as Americans are concerned, a symbol that everything may yet be all right with the country.

Ryun did not seek the role. It is, as one coach observed last week, an awful time for something like hero worship to happen. What Ryun must do now in the midst of it is run as well as he can for three straight days. First, a trial heat in the 1500. The next day a semifinal heat. Then, this Sunday afternoon at about 3:30pm Mexican time, if he has indeed survived to the finals, he must take his place with the other runners of his own world class in that Olympic bowlful of people (and with millions more watching him on television) and deliver. He must control the pack through the quarters, control the runners with his own pace or the threat of his own kick until he has them whipped—and then finish first. He has to win. He feels that anything less will not be enough, not silver, not bronze. "If you don't make it you are nothing," he says.