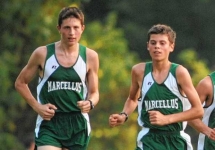 Although they were separated by two years of age, runners Jesse Garn and Ryan Manahan constantly pushed each other as cross country and track teammates at Marcellus High School.

In a little more than a week, the former Mustang teammates will likely be pushing each other again - but this time as competitors at the NCAA Indoor Division I Track and Field Championships at the University of Arkansas in Fayetteville on March 13-14.

Both runners have broken the 4-minute Mile barrier while in college - an eye-opening accomplishment for graduates and teammates of a small (Class B) Central New York high school. It doesn't stop there, though.