Willis looks ahead to Mile after Commonwealth Games bronze medal 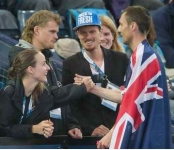 2008 Olympic 1500m silver medalist will have another crack at John Walker's national record of 3:49.08 in Michigan at a meet that he and wife Sierra direct.

Nick Willis will be back racing the Mile next weekend, aiming to put the frustration of his Commonwealth Games 1500m run behind him.

Willis is heading home to Michigan with his wife and son having spent most of his time in Glasgow in an apartment, rather than the athletes' village.

He has been in fine form of late and really felt this was a big opportunity.

Instead he had to settle for bronze, behind Kenyans James Magut and Ronald Kwemoi, and as he put it was left with "a huge amount of frustration thinking what could have been".

"I'm not saying I would have beaten those guys, but at least you want to be in the conversation with 100m to go.

"I wasn't in that conversation. But at the same time you don't want to miss out on being on the podium," the 31-year-old said.