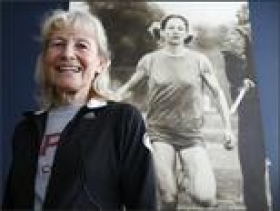 Brown, a women's running pioneer and humble legend, was also a five-time world cross country champion (1967-71), and over her career, she won 14 national titles. Brown also coached at Seattle Pacific University for 35 years, her alma mater, with 22 of them as head cross country coach.

FUN FACT: Doris, a member of several Hall of Fames, is only one of three women to hold the U.S. Mile record, both indoors and outdoors.

"One of my favorite track races was an indoor Mile in Vancouver, Canada... the Mile was a new race for women and so I had no experience, but our training and appreciation of the opportunity brought a win [and the first women's indoor sub-5 Mile]... that race seemed to give me a lot of...