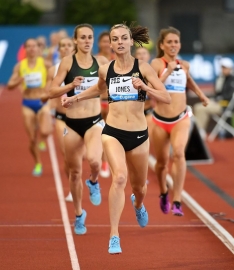 The professional runners of Team Boss used their first racing opportunity in five months to not just break records, but also give back to the Black Lives...

As one of the youngest competitors on the starting line at the 2018 USATF Outdoor Track Championships, Dani Jones...

Look at the results of the Mile finals at the 2018 NCAA Indoor Track & Field Championships and you’ll see that New Mexico’s Josh Kerr and New...