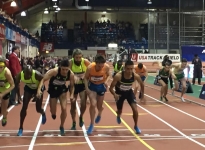 This past Saturday, February 14, 2015 was, in totality, one of the greatest days in Mile history, particularly indoors. Consider the following in a day of Mile magic and “love” across America on Valentine’s Day.

Beyond the incredible sub-4 blitz displayed above, Milepalooza 2015 excitement continued at the 108th Millrose Games Wanamaker Miles in New York City where: