Be Fearless: Make the Impossible Possible 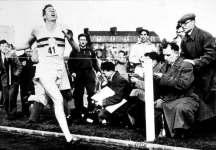 Bannister's historic sub-4 minute Mile time proved to other runners that it really and truly was possible.

In the early 1950s, many people believed that it was impossible for humans to run a Mile in under four minutes. Runners had been trying to break the four-minute barrier since the late 1800s. The world's top coaches and most gifted athletes had been trying to go sub-4 for years. They were dedicated, and they'd tried all sorts of training plans.

Yet, it seemed, the 4-minute barrier was beyond reach. People had tried to break it for so long that many were starting to believe it was impossible -- that the human body just could not go that fast. Then in 1954 Roger Bannister ran the Mile in 3 minutes, 59.4 seconds. A month and a half later, John Landy of Australia ran even faster. Then a year later three more runners broke the 4-minute barrier. Hicham El Guerrouj of Morocco currently holds the Mile world record of 3 minutes, 43.13 seconds set in 1999.

Once Bannister's time proved to other runners that it really and truly was possible, they were able to make the impossible possible and run the distance in under four minutes, too.

Your beliefs are powerful. If you believe something is impossible, that belief will erode your confidence and turn that impossible belief into a self-fulfilling prophecy. If a person with authority -- whether it's a doctor, a therapist or a teacher -- tells you that you "can't" do something, you will believe it, even if that person's prediction isn't accurate. And once you believe it, you will behave as if that prediction is true, by default making it come true. For instance, if I told a patient, "You are really screwed up. There's no hope for you," it could cause the patient to stop trying, even though there really is hope.