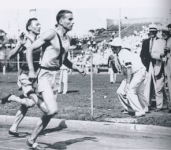 Just a week earlier on June 17, Bonthron lost his American record in the Mile when Glenn Cunningham of Kansas topped that with a world record of 4:06.8 in a highly-anticipated invitational race at Princeton’s former Palmer Stadium.

Bonthron was a well-beaten second that day in 4:12.5, far off his former AR of 4:08.7, and the ease of Cunningham’s victory was surprising as the two had traded indoor wins by inches at Madison Square Garden in New York earlier in the year.

Cunningham – aiming to become the NCAA’s first three-time winner in the 1500 / Mile – was comfortable in recreating his successful formula of taking off with two laps to go to, intent on deadening Bonthron’s killer finishing kick, and that’s just what he did on this return to the Coliseum (Cunningham was fourth in 1932 Olympic 1500).

This time, however, Bonthron stuck with Cunningham on the third lap, never letting the Kansan get more than a couple of strides ahead. Struggling to keep up was Penn’s Gene Venzke – himself a former holder of the indoor Mile world record at 4:10.0 – but as the final lap approached he dropped back.

On the last lap, Cunningham increased the pace but Bonthron matched it, still close behind until he moved up on Cunningham’s shoulder on the final turn. Bonthron, a native of Detroit, unleashed his speed on the homestretch to win by some 7 yards in 4:08.9, a new meet record as Cunningham finished in 4:10.6.

A week later the two met again at the AAU National Championships – the so-called rubber match as they were 2-2 in head-to-head races. Bonthron won another thrilling race, setting a world record in the 1500 at 3:48.8 as Cunningham was also under the old record at 3:48.9.

For his historic racing year, Bonthron won the 1934 Sullivan Award as the top amateur athlete in the United States.