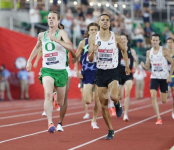 Headed to Tokyo as the youngest U.S. men’s 1500 Olympian since Villanova’s Marty Liquori in ’68, Cole Hocker, 20, looks and sounds remarkably convincing when he describes the Olympic final that he hopes to reach next month as “just another 1500.”

Hocker — the “pandemic redshirt” Oregon frosh who captured the NCAA Indoor Mile and 3000 crowns before racing to the Outdoor metric Mile title in June — acknowledges after catching Rio gold medalist Matthew Centrowitz at the line in the Trials final that he would have been shocked to see that outcome in a crystal ball a year ago.

However, this past school year the evidence of his running — training as much as racing —has been all he needs to feel confident he’ll belong when he toes the line for his Olympic heat come on Tuesday, August 3.

“The main thing I attribute that to,” Hocker says, “is having [NCAA 5000 champ] Cooper Teare to train with, and Charlie [Hunter] and James West, like all those guys. I mean, they’re top in the NCAA, but they’re also top in the world. Just having world class athletes to train with — I was kind of lagging behind them my freshman year [in the fall of ’19 and the pandemic-curtailed indoor campaign of ’20] and I was doing my best to stay with them. But as a freshman you’ve just got to stay patient and I knew I couldn’t jump into every huge workout that they were doing.

“But then this year I matured a little bit and I did, I just hung in with them every single workout. And that’s the main thing, I think, just having those guys to train with.”

That Oregon’s blue-chip Mile corps presented an advantage is hardly a surprise. But another group, too, has fueled Hocker’s fire: the second-guessing Monday morning quarterbacks of the internet to whom he addressed that fingers-to-lips shooshing gesture after sprinting across the line at the Trials.

Specifically, Hocker wished to silence for good predictions he could not sustain his performance levels of the early winter (3:50.55 indoor Mile in February) through the summer.

“It has been a long season and that’s something me and coach [Ben] Thomas both knew,” he explains. “I mean, this was the goal. Trials was always on the calendar, and then we both believed that I had to have a chance at qualifying. So that was definitely in the back of his mind in setting up training-wise.

“I don’t know, I heard a lot of people saying I was peaking too early in the season. But I knew that I was just doing strength at that point in the season and that kind of stuff.

“It really built up my confidence because I knew if I got to run that off of what I’d been doing, that it was going to be a good season. So we had always been preparing for this long season.”