Could the Mile be just the thing to entice new runners? 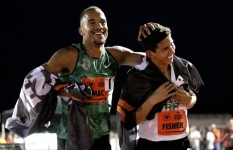 “The Mile is so embedded in American culture, and the near-ideal fitness distance is the Mile. Ten or 15 minutes of running and people get a health and fitness benefit.”

If running coach Ben Rosario is correct, witnessing elite Milers clock in around the 4-minute range will inspire the rank and file to go out and try it for themselves.

Rosario, a St. Louis native who trains a racing team in Flagstaff, Ariz., is behind the Festival of Miles charity track competition set for Thursday at St. Louis University High School. For its ninth year, a second day of events has been added: the inaugural Riverfront Mile, four races starting at Laclede’s Landing and ending on the south steps of the Gateway Arch.

“We’re hopeful people will latch onto the idea they can run a Mile after seeing the excitement at the festival,” says Rosario, 36.

The track event started in 2008 as a fundraiser for St. Louis University runner Brigette Schutzman, who had been badly injured in a car accident.