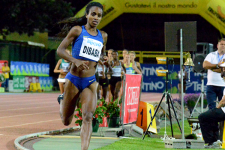 Genzebe Dibaba grabbed the headlines at the Palio della Quercia meeting in Rovereto, Italy after recording the second-fastest outdoor time ever over the Mile with 4:14.30 on Tuesday, September 6.

Dibaba, who set the world indoor record last February in Stockolm with 4:13.31, followed pacemakers until 750m before running alone for the final two laps. After the pacemakers led the field through 400m in 1:00.95, the pace slowed considerably on the second lap as Dibaba went through 800m in 2:07.24.

Dibaba beat World indoor champion Sifan Hassan, who finished more than 11 seconds behind in 4:25.50. USA’s Alexa Efraimson finished third in 4:27.29, an American Junior outdoor record, ahead of Italian Federica Del Buono, who made a successful return from two years of injury problems by breaking Fabia Trabaldo’s Italian under-23 record with 4:28.13 after going through 1500m in 4:08.94.

“Everything was perfect apart from the wind and the second pacemaker but I ran the second-fastest time in history and I am very happy,” said the Olympic silver medallist, who earlier this year set a world indoor mile record of 4:13.31. “My season is over. After a period of rest, I will prepare for a couple of indoor races.”