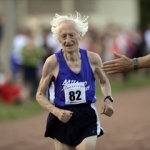 CAMBRIDGE, Ontario, Canada — From exultation to empathy, emotions were running high at the track for Friday night's Cambridge Classic Mile.

One world record — a sub-4 minute Mile on the crushed clay track at Galt Collegiate Institute by local Olympian Nate Brannen — came within seconds of being reached.

At 82-years-of-age, Ed Whitlock, Canada's fastest octogenarian, nearly broke the world record for the fastest mile run by someone over 80.

"I thought it was going rather downhill, I'm not in shape for a Mile race," Whitlock said.

Whitlock is training for the Scotiabank Toronto Waterfront Marathon in October. Besides being one of the world's fastest runners over 80 to run a mile, he also holds the record for fastest marathoner in the over-80 category at 3:15:54.