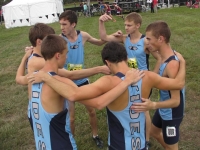 This week, the top guys from Gig Harbor are planning a trip to New York City for New Balance Nationals Indoor and a chance to race in the 4 x Mile. The national record is 17:20 (that's a 4:20 average), and it's a possible that it could go down.

"We took some down time (after cross country)," Wieczorek said. "We're building back in. If this meet was in February we probably wouldn't do it. But we treat it like starting (outdoors) a little bit earlier and the guys are rounding into shape."

Besides Moussa, who was at The Armory last year with Arcadia (CA), the experience will be something new for the other three.

"It's a fun opener," Wieczorek said. "It's a relay and it's low pressure. The guys are not super-duper sharp, but they are fit."