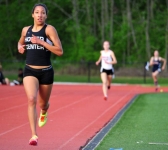 PITTSBURGH, Pa. - When Angel Piccirillo sprinted the straightaway moments before the McKinney Mile, the old track coach watched with admiration how effortless and fluid her stride appeared despite producing so much power.

“You can always tell the great ones. They stand out,” said Chuck McKinney, who founded the Baldwin Invitational and in whose honor the event is named. “She truly looked like she was in a class by herself.”

Since McKinney started the meet 39 years ago, the Baldwin Invitational has grown to where it now draws 170 teams and 1,900 athletes. On Friday, we witnessed record-setting performances by South Park’s Billy Stanley in the javelin and Hempfield’s Larisa Debich in the pole vault.

Yet a shy, straight-A student from tiny Homer Center in Indiana County, where she is one of 68 students in the senior class, stood head and shoulders above them all.

Piccirillo drove nearly two hours to run the Mile, an event that gained worldwide prestige when Roger Bannister became the first man to break the four-minute barrier 58 years ago Sunday. The race has been replaced at most high school meets by the 1,600-meter run.

When Baldwin resurfaced its track four years ago, it included markings for the Mile, about 9 yards behind the starting line, in hopes of making it one of the main attractions to the meet.

“It’s the number: One Mile, a nice, even, round, standard unit,” Homer Center coach Michael Gentile said. “Since Bannister broke it, it’s been a mystical event. It’s a magical number. You can’t pace yourself. You have to go after it."