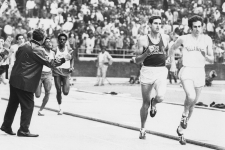 Track's rich history is full of great head-to-head clashes. To kick off our new series of trips to the TFN vaults to find coverage of some of the most memorable battles, we take you back to our II May 1971 edition for a legendary 4-lap clash pitting Jim Ryun against younger rival Marty Liquori. That issue featured a pair of stories on the Dream Mile, first a news piece by Jim Dunaway & Bob Hersh and then an accompanying feature by Hersh. How we reported it then.

A Long Kick Strategy By Liquori Snaps Ryun
Philadelphia, Pennsylvania, Sunday, May 16: Super-highlighted by one of the great—and most highly publicized—Mile dụels in history, the third Martin Luther King, Jr. International Freedom Games second-featured enough topflight performers and performances to stand out as an exceptional meet even without the Mile.

But the majority of the 20,000-plus fans gathered in the raw weather (55° and drizzling rain) were there to see one race only, the “Dream Mile.”

Manhattan frosh Joe Savage went to the front of the 11-man pack at the first turn and held the lead through the initial 660. Marty Liquori and Jim Ryun stayed in the middle of the pack, being in 4th and 6th at the first 440 in 61.1 and 61.4.

West Virginia’s Mike Mosser assumed the lead from Savage momentarily before Ryun took over, leading Mosser and Liquori through the half in a tightly bunched 2:03.3 for each. With some 700 yards remaining, Liquori made his move, accelerating strongly down the backstretch with Ryun in tow. Surprising Reggie McAfee of Brevard moved into 3rd at this juncture, shadowed by Byron Dyce. Liquori maintained his strong pace, and at the gun his 3:00.0 gave him an 0.3 bulge on Ryun.

The distance between the two stayed the same until the final curve, where Ryun pulled onto his rival’s outside shoulder. But he got no closer, as Liquori held the narrow margin to the tape, with both clocking 3:54.6, a PR by 2.6 seconds for Liquori and the fastest race for Ryun since his world record 3:51.1 in 1967. After the race, Liquori appeared to have more left than Ryun. Liquori’s strategic homeward kick from far out yielded a blistering 1:51.3 last half and a 54.6 final quarter—significantly faster than anything he has produced before in a quality race. [ED: Note that a subsequent reading of the film on the Bulova Phototimer adjusted Ryun’s time to 3:54.8, 0.2 behind Liquori.]

Meanwhile, halfmiler Dyce finally unleashed his lethal kick in the last 220 to top McAfee, 3:59.6–4:00.0. McAfee’s time is the fastest ever by a Black American, surpassing Harry McCalla’s 4:00.8 set in Ryun’s ’67 record race. All the placers behind the top two had trouble finishing, as an eager mob of friendly athletes, officials and pressmen quickly surrounded Liquori and Ryun.

The Dream Mile Becomes A Reality
“Jim made it boring by being so good. Maybe we can make it interesting again.” They sure did.

Jim Ryun, who for years dominated America’s Milers, and Marty Liquori, who wanted to “make it interesting” but had other objectives as well, renewed their track rivalry at the Freedom Games. Their race was a classic, every bit worthy of the excited anticipation which had preceded it, which is saying a lot.

The pre-meet interest, not only for track nuts but among sports fans generally, was a story in itself. The buildup was probably the greatest for any single footrace since the historic “Miracle Mile” at Vancouver in 1954, which matched legends Roger Bannister and John Landy, at the time the world’s only sub-4 Milers.

Seventeen years and more than 400 sub-4 minute Mile performances by over 100 sub-4 Milers later, the public still turns on to the 4:00 Mile. For reasons which some serious track buffs find incomprehensible, the Mile has always been a “glamor event” in this country. As a result, every 4:00 Mile is greeted with far-greater applause and headlines than would be given the 400th-best performance in any other event.

Because he is the World Record holder in the Mile, Ryun was the nation’s best-known runner at the time he announced his retirement from track in 1969. This retirement followed his first loss to Liquori in the NCAA Championships and his dropping out during the second lap of the Mile in the AAU meet a week later, a race which Liquori also won.

When Ryun announced his return to competition during the indoor season this past winter, it was obvious that a “rematch” with Liquori would have great public interest. What made this prospect even more intriguing was the development of Liquori into an even-better runner during the interim period.

There remained a question, however, of just how good Liquori was. In an article in Athletics Weekly, the British track magazine, in December, noted track expert Dick Bank, in assessing America’s Olympic prospects, said, Liquori “is obviously overrated in the United States (some actually believe he is in Ryun’s class)…”. Bank later explained that he was referring mainly to the fact that Liquori’s best times did not approach Ryun’s. And he had a point. Before the Freedom Games, Liquori’s best Mile was the 3:57.2 he recorded in the Astrodome in February.

But others felt that Liquori was capable of much faster and that he had competitive superiority which could not be measured by a stopwatch. The track world awaited a real test of this competitive ability.

There also emerged a quasi-sociological aspect to the race. As Neil Amdur of the New York Times wrote, “In many respects, the two Americans have come to symbolize sectional ideologies as much as separate personalities… Ryun was born in middle America… He is a shy, sensitive athlete who prefers personal privacy to public displays… Liquori… is candid, colorful and combative, on-and-off the track …” And there it was—the brash kid from the East against the modest, all-American boy from Kansas.

Except insofar as their personalities may affect their competitive ability, they should be irrelevant. But it was inevitable that track would succumb to the transformation from technical to human interest which has marked other sports. When Muhammad Ali fought Joe Frazier in March, millions of people took sides on the basis of their attitudes toward the fighters’ philosophies and saw the outcome of the fight as a vindication of Frazier’s more moderate position on political issues. And whenever Joe Namath has a pass intercepted, there are many fans who see it as a triumph of good over evil and as demonstrable evidence of the moral inferiority of his libertine lifestyle.

Since New York Jets games sell out and the Ali–Frazier fight grossed $20 million, there are clearly advantages to the creation of recognizable personalities in sport. But being both amateurs and gentlemen, Ryun and Liquori downplayed this aspect of the race. As Ryun put it, “A lot of people refer to Liquori as a bad guy, but he’s not.”

Entire thrilling race video plus post-race interview with the two Mile legends below.