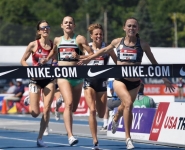 It wasn’t until after the 1500 meter finals at the USATF Outdoor Championships that Webster City native Jenny Simpson finally caught up to Sioux City native Shelby Houlihan. After the two passed the finish line, Simpson ran up to Houlihan to hug her and congratulated her. Houlihan not only beat Simpson for the second straight year in the event; she also took her stadium record.

"I wasn’t really listening to the announcer or anything," Houlihan said. "She just said 'Good job on the stadium record,' and I was like, 'Oh, I didn’t realize that happened. That’s awesome.'"

On Saturday afternoon at Drake Stadium, Houlihan edged out Simpson, clocking a facility record time of 4:03.35, besting Simpson’s previous mark of 4:03.41 in 2013.

“That’s awesome that I can etch my name in the history books a little bit more,” Houlihan said.

The victory was another memorable moment in what has shaped up to be an entertaining rivalry between the two Iowans. The 32-year-old Simpson, who won the 2011 World Championships, owns a 7-4 mark in head-to-head matchups against Houlihan. But the 26-year-old Houlihan is turning things around, winning the pair's last four showdowns, beginning with the 2018 Prefontaine Classic.

Houlihan also barely beat Simpson at last year’s USA Championship finals. Saturday was another close one. After watching Lauren Johnson jump out to be a big lead early in the race, Houlihan watched Simpson chase down the leader. But Houlihan didn’t panic. Instead, she stayed patient, eventually catching up to Johnson and then using a big kick down the homestretch to catch Simpson again.

“I was just trying to stay calm and just try to save that one last gear for the last 100 meters and I was hoping that I could hold them off,” Houlihan said.

She did. That was, until after they crossed the finish line. Simpson finished second with a time of 4:03.41. Shortly after Simpson crossed the line, she found Houlihan and congratulated the young star on breaking her record. Simpson said she sensed during the race that it could fall. 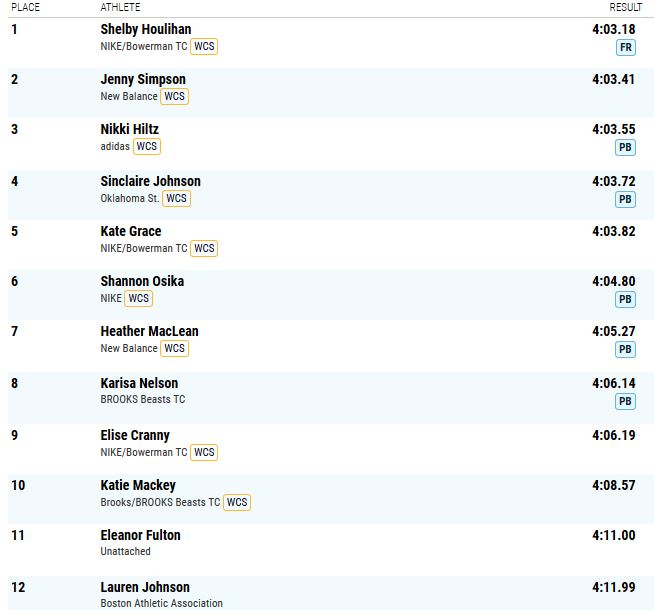