RALEIGH, N.C. – The inaugural Sir Walter Miler will take place on Friday, August 1, 2014 at the Meredith College Track. The event will start at 9:00pm. The event is building on the success of the 2013 “Sandman Mile” event that saw former multiple time NC High School State Champion and NCAA All-American, Sandy Roberts, take aim at the coveted sub-4 minute Mile barrier. On a few days notice, a crowd of more than 400 showed up to Cardinal Gibbons to watch Sandy’s brother Logan pace him through 2-plus laps in 1:59 before running the last laps solo and coming up just short of breaking 4 minutes.

This year, there will be help, and the addition of two more races that will make the event even better. Kicking off the night off is the Great Outdoor Provision Co. “Raleigh’s Finest” Mile, where many local celebrities will compete in an exciting, handicapped / head start race. Leading the field is former Mayor Charles Meeker. Meeker competed in 20 marathons, including the Boston Marathon 10 times. He has a personal best marathon time of 2:43:36.

Next up is the Capital RunWalk “Women’s Sub-4.5 Challenge,” where top female runners will take a crack at the 4:30 barrier. The talented field of women will be announced over the coming weeks at SirWalterMiler.com, and through the event's official Facebook, Twitter and Instagram accounts. 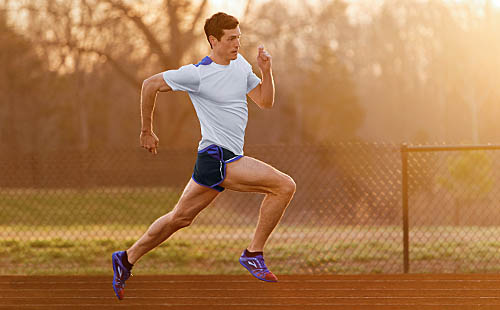 The races conclude with the Capital RunWalk “Men’s Sub-4 Challenge,” where the field will be set up for a sub-4:00 attempt. Sandy Roberts will look to improve on his personal best time of 4:01.24. He’ll be joined by a great field that will be announced one by one over the coming weeks. The first announced challenger is last year’s surprise 4th place 1500m finisher at the USA Outdoor Championships, Matthew Elliott. Elliot (photo, left) was recently dubbed the “Fastest Kindergarten Teacher in America” and was on the cover of the June 2014 issue of Running Times.

The Sir Walter Miler is also a Bring Back the Mile Featured Event, showcasing the best Miles across the country and throughout the year.

In addition, the event will have a few more exciting components that will engage the running and non-running community alike. First off, on Thursday night, July 31st, there will be a special “Eat with the Pros” dinner at the Busy Bee Cafe in downtown Raleigh. Food will be prepared by Chef Dave Mitchell and beverages will be served by Busy Bee owners Chris Powers and David Lockwood. This will give fans a chance to rub elbows with some top notch runners. More details are on the Kickstarter campaign page, which can be found at: http://SirKickstarter.com

The Kickstarter campaign will help fill out the fields for the free to the public event and to help cover associated costs and expenses. The Kickstarter rewards, in addition to the Busy Bee dinner, will also include a one month coaching plan and consultation from University of North Carolina assistant coach Logan Roberts. This plan will include complimentary entree to the Magnificent Mile in downtown Raleigh on September 14, 2014. There is also an opportunity to fire the starter’s pistol at one of the races, as well as a coffee mug with Oak City Coffee Roasters Coffee, a pint glass, an event tank top and a Brooks Technical running shirt.

On the day of the race, there will be a pre- and post-race party at Raleigh Brewing Company (across the street from Meredith College). Starting at 7:00pm that night, there will be live music, giveaways and multiple food trucks.

The action continues Saturday morning with 2012 USATF Cross Country Champion, Bobby Mack, leading the pros from the night before, and anyone else who wants to come on a trail run at Umstead Park. The event will start at 7:30am at the Harrison Road entrance (exit 287 off of I-40). It is free to attend.

For more information about the event or sponsorship, email sirwalterrunning@gmail.com or contact Pat Price at (919) 260-8013.