Inspiring Her Daughter, an Olympic Runner, Was No Sweat for a Fitness Guru 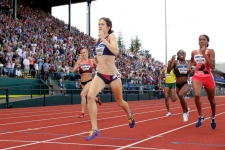 “Even if I didn’t envision this path, I always had coaches telling me, ‘You can do this in college; you can even do this after. My mom had cheerleading available in high school; she is fitter than most of us, but of course she wasn’t told that. But I was told it, and I believed it.”

When Kate Grace, the top American entrant in the Olympic women’s 800 meters, races on Wednesday, her first cheerleader will be her mother: Kathy Smith, a leading American aerobics instructor of the 1980s.

In 1984, the first year in which women were allowed to race the Olympic Marathon, Smith beamed in a red, white and blue leotard on the cover of an Olympic issue of Shape magazine. In one generation, Smith transformed herself into a successful entrepreneur in women’s aerobic fitness while instilling the value of competition in her daughter.

Smith, now 64, graduated from high school in 1969, the year that Yale, where her daughter excelled in athletics, began admitting women.