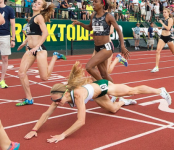 Before Lauren Davenport Johnson could run in Beijing, she had to tumble in Oregon.

Johnson, a professional runner and Andrews native, captured fourth place in the women’s 1500 meters at the USA Track & Field Outdoor Championships in Eugene, OR, on June 28 with a dive at the finish line.

That effort, coupled with her performance at a race in Belgium a few weeks later, punched her ticket to China’s capital for one of the biggest track & field events in the world, the IAAF World Championships.

Johnson, who runs for Oregon Track Club Elite, says her dive at the end of the race in Oregon, held at Hayward Field on the University of Oregon campus, was actually by accident, the result of leaning forward too far to get past an opponent.