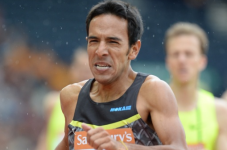 "I will move on to the World champs in Beijing with the goal of bringing in another medal for the USA. I have too many people supporting me, that it is the very least I can attempt to do."

A lot has changed in the last year for Leo Manzano. New coach, new agent, new sponsor, and a new focus on the 2015 World Championships in Beijing. Normally, with change comes adjustment and a settling in period. Manzano’s performances over the course of this shift however have managed to excel outside of the norm. After taking on coach John Hayes in mid-April of 2014 he went on to immediate success, taking the title of U.S. 1500m champion at the June 2014 USA Outdoor Championships in Sacramento, then pulling down a new personal best in the 1500m (3:30.98) at the July 2014, Monaco, Diamond League meet.

Tick forward to the 2015 season and the name of the game has continued to be consistency and steady improvement for Manzano. With his most recent run in the stacked field of the Prefontaine Classic: Bowerman Mile, Manzano clocked a solid 3:53.55 for an 11th place finish, just over two seconds off winner Ayanleh Souleiman (3:51.10) and runner up Matthew Centrowitz (3:51.20). Just prior to this, at Texas Relays Manzano cemented his legacy at his alma mater, University of Texas, by breaking his own 800m meet record with a 1:46.63. He will attempt another 800m at the adidas Grand Prix this Saturday.

With the World Championships just over two months away in Bejing, Flotrack had the opportunity to catch up with Manzano to get some insight into the type of training and preparation he has done to allow him to advance so smoothly into new territory and accomplish his big seasonal goals.