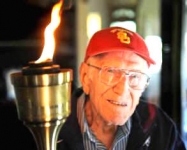 HOLLYWOOD HILLS, Calif. -- I have interviewed some extraordinary people in my more than 43 years as a journalist, but some time back I was able to meet with one of the most inspiring men I have ever met. His name is Louis Zamperini, a true living legend who, at the age of 94, is still serving the Lord.

My wife Norma joined me as we drove up through a winding road in the star-studded Hollywood Hills to the home of Zamperini, where I was able to interview this incredible man who is the subject of a new book called “Unbroken: A World War II Story of Survival, Resilience, and Redemption,” which immediately became a best-seller, and was written by Laura Hillenbrand, the acclaimed author of “Seabiscuit.”