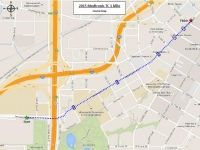 11th edition to draw 3,000 runners to cultural heart of Minnesota; event also second stop on the Bring Back the Mile Tour 2015

ST. PAUL, Minn. – Hennepin Avenue will provide the dramatic backdrop for the Medtronic TC 1 Mile, which will draw more than 3,000 runners to a brand new downtown Minneapolis course on Thursday evening, May 14. The 11th event edition, which will host the USATF Men’s & Women’s 1 Mile Road Championships, moves to the city’s signature thoroughfare after a decade of racing on Nicollet Mall.

The event, the second stop on the Bring Back the Mile Grand Prix Tour 2015, will start near the Parade Athletic Fields adjacent the Minneapolis Sculpture Garden, race by the Basilica of St. Mary, and finish in the heart of the Hennepin Avenue Theater District near the 6th Street intersection. The move to the lively downtown locale was prompted by planned construction on Nicollet Mall and the addition of the Metro Transit Green Line last summer.

“We knew the event would need to find a new home by 2016 at the latest, so we started looking for a new route well ahead of time,” Twin Cities In Motion Executive Director Virginia Brophy Achman said. “When conversations with the city turned to running into downtown Minneapolis on Hennepin Avenue, we were excited by the possibilities. We think the atmosphere for the event will pull from the bustling energy of downtown, as we run through the heart of Minneapolis.”

The 2015 Medtronic TC 1 Mile gets underway at 6:45pm on Thursday evening, May 14 with the first of seven waves of runners, culminating with USATF Championship waves where the top female and male Milers in the country will race for a $25,000 prize purse and a pair of $10,000 event record bonuses. 2013 Medtronic TC 1 Mile champion Nick Willis, the 2008 Olympic silver medalist from New Zealand, holds the men’s record at 3:56.1, while American Sara Hall, the 2011 race winner, holds the women’s event record, clocking 4:30.8.

"The course elevation map, at least on paper, reminds me of New York’s Fifth Avenue Mile, and that’s super-fast,” said Heather Kampf, the 2012 Medtronic TC 1 Mile champion who competes for Team USA Minnesota. “I'm happy to see the course doesn’t turn and that spectators will be able to see runners coming from a long way. It’s

always better to put the climb in early, and I think given the quality of fields anticipated for the TC 1 Mile, the race will be fast if we want it to be fast. Pro athletes will be excited that the record bonus is still out there."