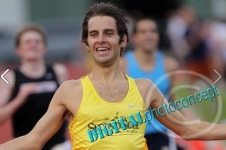 Leslie beat a talented field of six world-class runners with a time of 3 minutes, 58.98 seconds. Northeastern senior Eric Jenkins finished second at 4:00.13 and University of Notre Dame grad Daniel Clark was third with a 4:00.29 clocking.