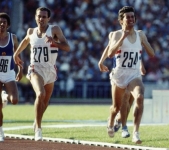 Long before Sebastian, Lord Coe, hit the giddy heights of presiding over London 2012 and then taking over as grand pooh-bah of the International Association of Athletics Federations (IAAF) from Lamine Diack, he was a middle distance runner. A very good one too, particularly his 1500 meter run at the Los Angeles Olympics.

But as happens - although relatively rarely - there was someone else of his generation, from the same country, who was every bit as good as him: Steve Ovett.

Just as Carl Lewis & Ben Johnson were chalk and cheese in personality and background, so were Coe & Ovett.

The later Mile legends first raced as teenagers in a schoolboys’ cross country championship in 1972. The 16-year-old Ovett came second with the 15-year-old Coe third. (NOTE: The schoolboy who won that day didn’t pursue an athletic career; he became a teacher).