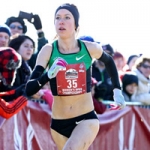 Emily Infeld was fourth in the women’s race at the USATF Cross Country Championships on February 2 in St. Louis, qualifying for the U.S. team at the world cross country championships in Poland on March 24. It was the first 8-K for the Georgetown grad, who is now part of the Jerry Schumacher-coached Oregon-based training group that includes the two USATF cross country champs, Shalane Flanagan and Chris Derrick, along with Kara Goucher, Matt Tegenkamp, Chris Solinsky, and Evan Jager. Infeld is also entered in the women’s Mile at the Millrose Games in New York on February 16. She was the 2012 NCAA indoor 3000-meter champion. Infeld was eighth in the 5000 at the 2012 U.S. Olympic Trials in 15:28.60, a personal best.