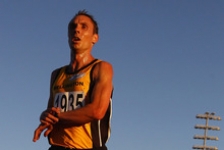 Former Olympic Games silver medallist Nick Willis is going to trial his new front-running tactics today in a bid to break four minutes for the Mile on grass at the International Track Meet in Christchurch.

The 29-year-old has set three major goals for his "Down Under campaign" - to run the 27th sub four-minute Mile of his career on Christ's College's grass track, to surpass the legendary John Walker's record for the fastest Mile on New Zealand soil and to qualify for the world championships at a major meet in Sydney in March.