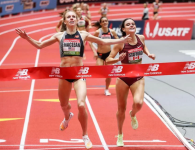 “I’ve been visualizing this for so long. Actually seeing it, and seeing my family with a whole row to themselves with all my nieces and nephews here, made me so happy.”

By Matt Williams, The Salem News

BOSTON — Heather MacLean is still getting used to the idea of racing from the front — so when Canada’s Lucia Stafford passed into the lead towards the end of the women’s Mile at Saturday’s New Balance Indoor Grand Prix, MacLean knew exactly what to do.

With a sold out crowd at ‘The Track’ roaring for the hometown hero, MacLean found her trademark kick and broke the tape in 4:23.42 to win by exactly one-tenth of a second.

The 4:23.42 was a new personal record for MacLean and also the best Mile time run by any woman in the world this year. She's now also the 8th fastest American woman for the indoor Mile ever.

The 27-year-old from Peabody is the defending United States indoor champion in the 1500 meters, the event she ran at the Tokyo Olympics in the summer of 2021. The Mile run is just over 1609 meters — a little bit longer than her prime distance.

“The Mile is always a nervous event for me,” said MacLean, who went out strong and never trailed anyone but rabbit Cory McGee for the first seven laps of the eight-lap race. In each of her big races over the past few years, MacLean has hung in the pack and usually moves up several places on the bell lap — thus carrying the mantle at the front is a new focus.

“I decided to take the initiative, which if you know me as a racer, I’m not known to do that,” explained MacLean, who only trailed for 40-50 yards. “I made that change and had to hang on for the last 100 or so. When I got passed it was like ‘OK’ and I woke up a little bit.”

As a professional runner with Team New Balance, this world class track in Boston that opened last spring is MacLean’s home base. Saturday’s 27th Grand Prix broadcast live on NBC was the first professional meet held at the facility, considered one of the fastest tracks in the country (Dutch runner Femke Bol set a world record in the women’s 500, for instance).

Plenty of fans were heard shouting ‘Let’s go Heather!’ as MacLean was introduced at starting position the Mile.

As many as 5,000 fans can fill The Track, so hearing cheers and seeing the grandstands full is a real treat for someone that’s logged hundreds of training miles with the place empty.

“I’ve been visualizing this for so long. Actually seeing it, and seeing my family with a whole row to themselves with all my nieces and nephews here, made me so happy,” said MacLean, who prepared for the big day by celebrating nephew Logan’s fourth birthday Friday night.

Looking up at the ceiling before the gun started her race, MacLean thought of her late father, Robert. He was an ironworker and his union (Local 7) was part of the Track’s construction.

“I felt so at peace,” MacLean said, “there’s a lot of really good energy for me here.” 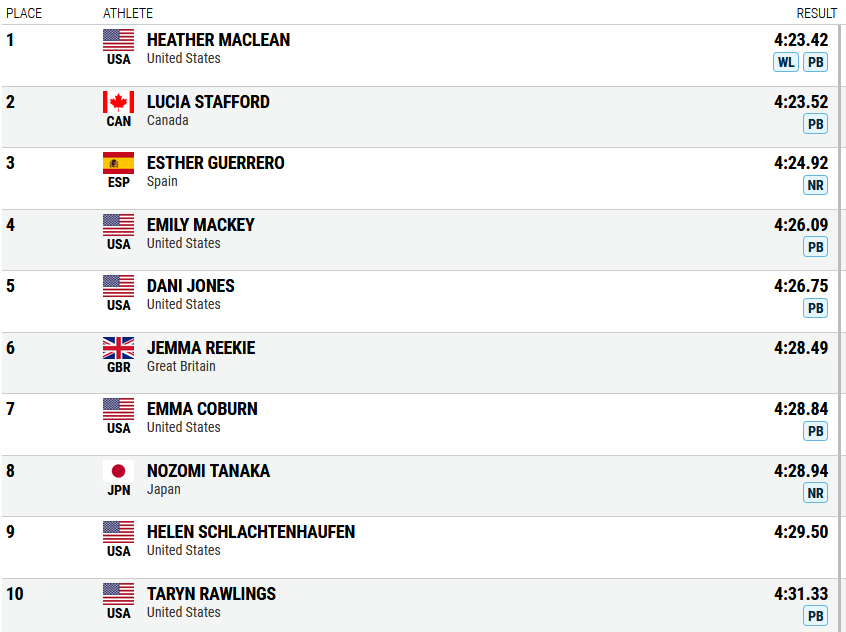