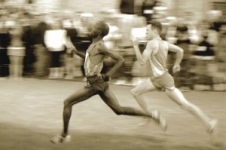 By Greg Mercer, The Record

CAMBRIDGE, Ontario — Canada's fastest octogenarian and one of its fastest marathoners will join a star-studded running celebration on the old clay track at Galt Collegiate next Friday, June 14.

And if you're young and fast enough, you could be running alongside two-time Olympian Eric Gillis and other past Olympians, too.

The marathoner from the Speed River Track and Field Club will join other local Olympians at the Cambridge Classic Mile June 14 in a race against local elementary, middle and high school athletes, as part of an evening designed to promote the Mile-long running event.

Gillis was to be joined by fellow Olympic marathoner Reid Coolsaet, but he was sidelined this week with a broken collarbone in a mountain biking accident.

Area schools can send a male and female runner to compete for a chance to race with Gillis, plus speed skating sisters Amanda Overland and Cindy Overland, middle distance runner and coach Paula Schnurr and gymnast Madeline Gardiner.

The top three runners in each age category will get to run with and learn a few things from the Olympians in a new first for the Classic Mile at the Galt high school.

"We wanted to set up a legacy, a link between our fantastic pool of local runners, and give our elementary and high school runners chance to mingle with them in a meaningful way," said John Carson, the event's organizer and founder of local non-profit Run for Life.

The Classic Mile event, started in 2004 as a tribute to Roger Bannister's remarkable sub-four-minute Mile feat 50 years earlier, will also feature races from some of the best local high school, college and elite-level runners.