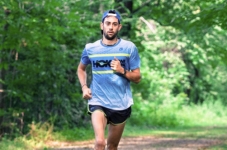 I hopped on the phone with my friend and former teammate, Kyle Merber, to chat about his upcoming appearance in the Wanamaker Mile. I figured I’d write up a tidy little page-long narrative about how good he feels, and how he hopes to win.

What instead transpired was a sprawling half-hour conversation about training philosophy, the future and what makes someone a New Yorker (that last part was cut short because Kyle had to go eat sushi.) Here are some key excerpts from the transcript.

Paul Snyder: You grew up on Long Island. You went to Columbia. You now live in Hastings on Hudson, after a few years in Clinton, NJ. Besides your nine-month stint in Austin, TX, during your fifth year at UT, you’ve spent your entire life within about a 60-minute drive of the Armory. Is anyone in the field this year for the Wannamaker Mile that is as New York as you?

Kyle Merber: Johnny [Gregorek] would be the only person in the field who could rival me in terms of New Yorkness. His grandparents are from Brooklyn and his dad’s from Long Island, but he roots for the Pats and Sox, so he’s disqualified. What ultimately makes me the most New York is the fact that I’ve traveled a ton and still think the rest of the world is worse than New York. Plus I have immigrant grandparents and some Jewish in me. It’s very important to have at least a little in you. I know latkes, ya know?

PS: Oh. I know. So with that in mind, how important is Millrose to you? You won the high school Mile in 2008 and I’m pretty sure nobody’s won both the high school and pro Mile races there.

KM: Everyone comes to the Armory and says this “feels like home.” But like I said, this is actually my home, like, I did grow up racing here. The first couple of times I was in Wanamaker, I put a lot of pressure on myself; I thought about the fact that I won in high school and how cool it would be to do that again as a pro. But my history at Millrose is absolutely terrible. I think I’ve run 4:02, 4:05, and DNF’d as a rabbit. That’s my history. Especially indoors, in a race where there are so many good athletes, you can get stuck jostling, and I struggled with that as well as with the pressure I put on myself.