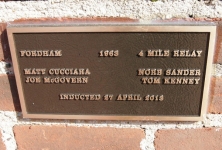 "Everybody has a different story," jokes Dr. Norbert Sander. "We’re four guys and there are four different versions of how it happened.

The one thing not subject to debate is that 'Doc' Sander — and his three undersung Fordham University teammates, Matteo Cucciarra, Joe McGovern and Tom Kenney — scored one of the biggest upsets in the 119-year history of the Penn Relays when they won the Championship of America college four-Mile relay title in 16:42.7 at the then-still cinder-tracked Franklin Field in 1963, demolishing the prior Penn record of 17:11.3 — set four years earlier by Penn State — by a whopping 28.6 seconds.

They were saluted as Class of 2013 Wall of Fame honorees at a gala gathering at The Palestra Friday night, and they were saluted all over again — before the huge Franklin Field crowd — on a sun-splashed Saturday program at the classic Penn carnival.

It was the Oregon Ducks first in the 2013 four-Mile relay, which honored the Fordham team — but their 16:17.57 was just 25.13 faster than those '63 Rams — on a track rated "at least a second faster per lap, maybe more than that, than Penn's old cinder track," by Cucciarra, and probably everyone else who was there.

"Fordham?  Nobody gave us a chance."