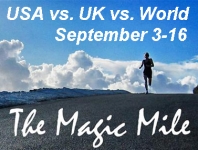 As part of the Magic Mile Global Team Challenge, Bring Back the Mile & Santa Barbara Running partner for Mile runs on September 5 & 12 along the waterfront

SANTA BARBARA, Calif. – (August 29, 2012) – The locally based Bring Back the Mile campaign has accepted the Magic Mile Global Team Challenge announced by MarathonTALK, a British media outlet and events group. The main objectives of the Magic Mile competition, to be held September 3-16, are to see how fast you can run a Mile and to promote fun and fitness via the most iconic distance in sport. The team challenge also has a competitive side to it as the U.S. battles it out with the UK and team “Rest of the World” represented by The Naked Runners in Australia to see which group can log in the most Mile times.

“The Mile gauntlet has been thrown down by our friends at MarathonTALK, and we hope to show the world that the Mile is America’s distance,” said Ryan Lamppa, Bring Back the Mile Founder. “With our beautiful waterfront setting here in Santa Barbara, we hope many locals join us for a Mile run. Time is secondary, fun is primary.”

In partnership with Santa Barbara Running, BBTM is inviting community members of all ages and ability to join them in a fun, free Mile run on Wednesday, September 5 and Wednesday, September 12. The run will begin at 6:30pm on the ocean side of Chase Palm Park near the intersection of Cabrillo Boulevard and Calle Puerto Vallarta. Post-Mile, runners can meet up at Union Ale, which will hold Mile-centric specials until 8:00pm.

“Whether you’re a running veteran wanting to run a fast Mile or someone just looking to have some healthy fun on a Wednesday evening, the Mile is the perfect distance,” said Joe DeVreese, owner of Santa Barbara Running. “The Magic Miles here will also be an excellent tune-up for the inaugural Solvang Mile on Saturday, October 6.”

Whether you participate in Santa Barbara or run a Mile on your own, to make your Mile count during the Magic Mile period there is a quick and easy registration process:

Step 1: Registration is now open at www.marathontalk.com/challenges/magic_mile.php
Step 2: Between September 3-16, run one flat out Mile.
Step 3: You can run your Mile solo or set up or find a Mile event in your hometown.
Step 4: Submit results by 12:00 GMT Tuesday, Sept 18 (7:00pm EST Monday, Sept 17)

The Mile holds a special place in Track & Field and beyond because no running distance, or field event for that matter, has the history, the appeal, the “magic” of the Mile. The first sub-4 minute Mile by Great Britain’s Roger Bannister in 1954 is regarded as the greatest individual athletic achievement of the 20th century (see Forbes November 18, 2005 article HERE), and no other event has produced an equivalent of the sub-4 minute Mile standard in the sport, in the media and in the public’s mind.