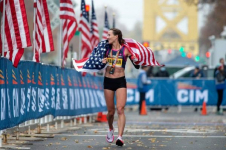 When Sara Vaughn and her husband and coach, Brent, returned to their Boulder home Wednesday evening after Sara’s course record win at the California International Marathon (CIM) in Sacramento, Calif., the scene was, she said over the phone as her 2-year-old son David offered her bites of dessert, “A little chaotic.”

That’s because the Vaughns’ four children, ranging in age from Kiki, 15, to David, had not seen their parents for five days, giving Sara a chance to concentrate on her marathon debut.

“I learned a long time ago it is easier to focus if we get some babysitters,” said Vaughn, a Nebraska state high school champ before running for the University of Colorado, where she met Brent, himself a former star runner. She’s run 4:04 for 1500 meters, 4:27 in the Mile, and raced in the 2017 World Track & Field Championships.

And focus Vaughn did, clocking 2 hours, 26 minutes 53 seconds, the fifth-fastest marathon debut ever by a U.S. female. In addition, she is only the fourth U.S. woman to record a sub-4:30 track Mile and sub-2:30 marathon (also Francie Larrieu Smith, Molly Huddle and Jordan Hasay).

Her race strategy should be taught to anyone running a marathon at any level. Vaughn ran her first 5 kilometers in 5:50 per mile pace, gradually getting faster and finishing with a 5:15 final mile. Her time comes to an average pace of 5:36 per mile.

“I was not surprised so much by the time, but by the fact that everything went well,” said Vaughn, 35. “In a marathon there are so many variables that can go wrong,” such as improper nutrition or pacing, or dropping a water bottle. The crowds were so loud in the marathon — the race was canceled in 2020, making this year’s marathon “even more celebratory” — that Vaughn could not hear the mile splits during the final miles.

“I went in going for the win, and we said that if I felt good, to push the pace the last 10K,” Vaughn said. “I was so focused on executing the race and paying attention to how I felt.” At 20 miles, Vaughn saw a race clock and did some calculations. “It is hard to do math, good math, at the end of a marathon, and thought I was going to finish in 2:30,” said Vaughn. Then, after two 90-degree turns, she turned a corner 75 meters from the finish and knew she would get the course record. Finishing in second was Molly Grabill, 29, of Superior, in 2:29:17, with Boulder’s Briana Boehmer seventh in 2:33:20 and Hiruni Wijayaratne of Broomfield 10th in 2:34:22.

“It was a special day for Sara,” said Brent Vaughn. “She’s worked hard for a lot of years, and we know success isn’t always guaranteed, so we’re enjoying the moment.”