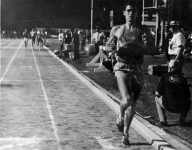 Seventeen-year-old Jerry Proctor upset six-time national champion Ralph Boston in the broad jump; Charlie Greene finished second in the 100-yard dash; defending champion Tommy Farrell ran dead last in one trial heat of the 880-yard run; and world indoor record holder Dave Patrick trailed his field in another heat. That is the way things were going last Thursday in the first half of the two-night AAU Championships at Bakersfield, Calif.

Then, at about 9:15 Friday evening, Jim Ryun took over. With a race plan few people expected, Ryun rushed into a lead at the start of the Mile run, widened his advantage for three laps, then sprinted the last quarter in 53.5 seconds, leaving his nearest opponents some 40 yards behind. Suddenly the 1967 AAU could no longer be remembered for such earlier disappointments as Boston's troubles or Jim Hines's tainted sprint victory over the infuriated Greene. Ryun had run the Mile in 3 minutes, 51.1 seconds!

The time was .2 second under his previous world record, set last summer at Berkeley, Calif. This one was achieved without the aid of pacesetters or opponents strong enough to push Ryun to his limit. Instead, it was Ryun who pulled the others along. Jim Grelle, who is 30-years-old and had run only one Mile race all season, placed second in 3:56.1, and the first seven finishers broke 4 minutes. Four of them, including Martin "Marty" Liquori, the high-schooler who was seventh, were under 4 minutes for the first time. Liquori, a small, dark-haired 17-year-old from Newark, shook Ryun's hand eagerly after the race. "I was awfully proud to be in the race," he said. "Thank you for setting that pace."

All 11,600 spectators should have thanked Ryun, for his record seemed to establish the pattern for the entire night. Two hours later another world record was set as USC sophomore Paul Wilson vaulted 17'8" to break teammate Bob Seagren's two-week-old mark of 17'7". Tommie Smith, Lee Evans and Wade Bell joined Ryun in sweeping every meet record, from the 220-yard dash through the Mile, off the books, as a total of seven AAU marks were added to the two set on Thursday by Hammer Thrower Ed Burke and Discus Thrower Gary Carlsen. Overnight an inconclusive and turbulent meet turned into one of the most exciting AAU Championships ever.

Entering the stadium Friday evening, Ryun had no idea of the wonders he was about to perform. He was not even sure he would try for a record. "I'm prepared for a big effort mentally," he said, "but I'm still not sure I'm all right for it physically. It all depends on just how good I feel." Thoroughly rested after an easy week, he stood for a few moments on the grass near the entrance to the track, then turned to some friends. "Don't take this the wrong way," he said quietly, "but could I have about 20 minutes to myself right now?" He had made his decision. He jogged off alone across the field outside the stadium, then sat down under a clump of trees to complete the loosening-up exercises that would prepare him, physically and psychologically, for the fastest Mile that has ever been run.