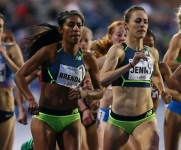 DES MOINES, Iowa – Five-time Drake Relays champion Jenny Simpson returns to the Blue Oval to challenge the American outdoor 2 Mile record as part of Hy-Vee Night at the Drake Relays, Blake Boldon, the Franklin P. Johnson Director of the Drake Relays, announced Tuesday, April 3. Boldon also unveiled world class competitors in the pole vault and high jump inside Drake Stadium for what has the potential to be a historic night of track & field action.

Simpson, the Drake Relays presented by Hy-Vee reigning 1500 meter champion and Olympic bronze medalist, will challenge the American record of 9:20.25 in the 2 Mile race Friday, April 27, under the lights at Drake Stadium.

"I'm so excited to be returning to Iowa again this year to compete in my first outdoor race of 2018 at the Drake Relays," Simpson said. "I've had so many special runs on the Blue Oval including collegiate and stadium records and this year records are on my mind again. I'll be returning to the Drake Relays to challenge the outdoor 2 Mile American Record. Runs like this are never easy or predictable but I'm excited to face the challenge in front of fans who have cheered me on to great runs in the past."

Last year, Simpson won her fifth-straight race at the Drake Relays presented by Hy-Vee with her 1500m win as she held off rival Brenda Martinez. Martinez returns to the Relays to challenge Simpson again. Rising star Alexa Efraimson, who owns the American Junior record in the 1500 meters (4:03.39) and the national high school record in the 3000 meters (9:00.16) joins the veteran laden field racing toward an American national record.