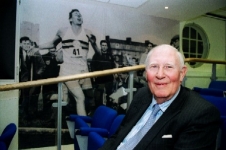 Mile legend will be looking back at his own personal achievements, including the first sub-4 minute Mile and more.

British athletics legend, Sir Roger Bannister, will be the first Reading 2016 ‘An Audience With…’ at Reading Town Hall on Monday, January 18.

Sir Roger’s sporting feats are written into British athletics history as the first person to break the coveted 4 minute Mile barrier, an achievement that had previously been thought impossible. In ‘An Audience With Sir Roger Bannister’ he will be looking back at his own personal achievements, including that sub-4 minute Mile, his involvement in the European Championships, Olympics and other records, as well as his distinguished career in neurology.

An Audience With....is part of this year's celebration of Reading's Year of Culture.

Mark Prescott, creative director for the Year of Culture, said: “We are hugely honoured to have Sir Roger as the first speaker in what will be a year-long lecture series to tie in with the 12 themes of Reading’s Year of Culture."