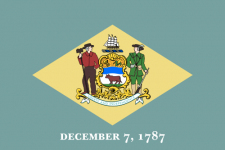 Vic Zwolak, born in Wilmington, who is one of the most accomplished Delaware Milers and its first track & field Olympian (Tokyo 1964, Steeplechase), was also a three-time NCAA champion at Villanova where he won the 1963 cross country title as well as the 1963-64 3000m Steeplechase crowns.

At the high school level, Tatnall HS has dominated the middle distance lists (see the below). Haley Pierce's 4:45.72 Mile at the 2011 adidas Grand Prix in New York is the prep state record.

JOIN BBTM
BBTM’s state-by-state Mile guide is being produced to share the rich story of each state’s history with the Mile, a distance regardless of age, gender or fitness-level, that everyone understands. If you consider yourself a Delawarean T&F sage and would like to help us fill out our guide, leave comments below or email milemaniac@bringbackthemile.com. We welcome your support and feedback!