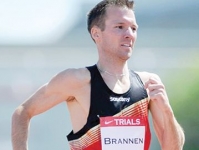 By Bill Doucet, The Record

In 1954, Roger Bannister became the first man to run a sub-4 minute Mile.

Nathan Brannen accomplished the same feat 47 years later as a high schooler – only the seventh to do so at such a young age – just beating the barrier with a time of 3:59.85.

The question is: Does Brannen have another sub-4 minute Mile under his belt?

The city will find out on Friday, June 14 when the two-time Olympian takes to the crushed clay track at Galt Collegiate Institute in a bid to get under four minutes as the main event at the Cambridge Classic Mile.