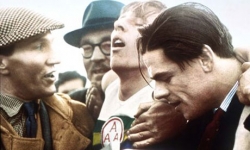 Franz Stampfl coached Roger Bannister to the 4 minute Mile, but he had an extraordinary backstory, including surviving a U-boat attack

By Paul Connolly, The Guardian

Ralph Doubell began running in the hope of seeing the world. Spindly, 17, scraping by at the University of Melbourne, Doubell figured he could travel for free, or at least on someone else's dime, if he made the national universities athletics team. Even getting as far as New Zealand for a track meet would be a start.

To improve his chances Doubell showed a glimpse of his soon-to-be famed fortitude by approaching the university's Svengali-like track & field coach, Franz Stampfl. The Austrian had an imposing aura, one accentuated by an apparent brusqueness, the toughness of his training regimens, and his extraordinary history. And when you discover it included war-time internment and surviving eight hours at sea after a German U-boat attack, it can make his coaching Roger Bannister to the 4 minute Mile in 1954 seem a mere footnote.