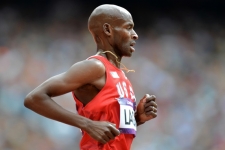 After Bernard Lagat competes Saturday in the Fifth Avenue Mile, he plans to do something that would feel completely foreign to many elite runners: He will toss his sneakers in a closet and pig out for the next five weeks. No running. No sit-ups. No heavy lifting, except for a fork.

For a handful of top-notch athletes, including Lagat and fellow U.S. Olympians Matthew Centrowitz and Leo Manzano, Saturday's race will mark the end of a taxing year of competition. There were long training runs last fall, indoor races last winter and meets throughout Europe this summer. Lagat is ready for a long break, so he is going to take one—just like he has every fall since 1999.

At age 37, Lagat continues to defy the corrosive effects of time. A four-time Olympian, he placed fourth in the 5,000 meters at the London Games in August. He owns seven American records, ranging from the 1500 to the 5,000. He is the defending champion of the Fifth Avenue Mile—he won last year's race in 3 minutes, 50.5 seconds—and doesn't appear to be slowing down at all. "Talk about a superhero," said Manzano, the Olympic 1500 meter silver medalist.