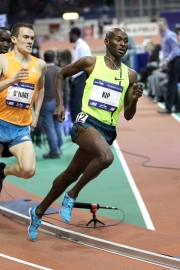 
Bernard Lagat, age 43, made his 26.2 mile debut at the 2018 TCS New York City Marathon and the five-time Olympian ran 2:17:20 to place 18th overall. In 2020, he retired as a professional runner and is currently the Head Coach of the Cross Country program as well as assistant Track & Field coach at the University of Arizona.

At the 2015 NYRR Millrose Games Wanamaker Mile, Lagat, 40, shattered the Masters (40 & older) indoor and absolute Mile record with his 3:54.91 clocking. He finished fourth overall against a world class field.

At the 2015 Sainsbury's Anniversary Games in London on July 25, Bernard ran 3:57.91 in the Emsley Carr Mile to set an outdoor Masters world record and became the first (and only) Master sub-4 indoors & outdoors.

In 2011, Lagat also claimed his first 5th Avenue Mile title, and he is only one of two men to go sub-3:50 in the Mile - indoors and outdoors (world record holder Hicham El Guerrouj is the other).

At Washington State University, he was an 11-time NCAA All-American, winning the 1999 NCAA Indoor Mile title in 3:55.65.

FUN FACTS: His nickname is Kip and he loves playing golf.

Time or tactics? Based on recent conversation on our Message Board, there are still those who think that Matthew Centrowitz’s 2016...

“My body felt hot and tired, but mostly it was my quads that were killing me. At that point, time is irrelevant. You just want to finish..."

Plagued by cramping quads and calf muscles over the final miles, Bernard Lagat (right, PhotoRun.net) struggled to the...

With 5 Olympics and 2 medals plus 5 World Championship titles outdoors and indoors won, Bernard Lagat, who will turn 42 in December,...

Bernard Lagat: Farewell to the Track

“If I had one opportunity to go back, I would have run with Hicham El Guerrouj in the Mile when he was breaking the world record [3:43.13] or when he was running 3:45, 3:44s. I would have loved to have been there."

Bernard Lagat, 41, ran the first round of the men’s 5,000 meters on Wednesday morning. With his fifth-place finish in his...

Ace Bernard Lagat: On running and the Mile

Multiple record holder and 13-time medalist Bernard Lagat on how to run the Mile, enjoying a glass of post-race wine and why the 100m doesn’t do it for him

So Bernard, what have you been up to lately? I’ve been training hard since I came back from the U.S. trials. I’ve had...

RunBlogRun #1: How did you find the race today?

Bernard Lagat: Conditions were tough, and I'm not too happy with the...

In 2014, Bernard Lagat earned the silver medal at 3000 meters at the World Indoor Championships, kicked to another outdoor USA 5000 meter title,  and had a...

Now, for the first time in his storied track & field career, Bernard Lagat...

BANDON, Ore. – Under rainless skies and calm winds, Rob Hogan of Ireland bested a field of 25 professional speed golfers to capture the title...

He is 38 now, but if Bernard Lagat has lost some speed on his fastball, the falloff is hard to detect. He set an American Record in the 2-Mile this winter (8:09.49), won the World Indoor 3000m title last year and missed a 5000 medal in London by a fraction...

Most athletes peak at about the age of twenty-six or twenty-seven. For tennis players, it’s a bit younger; for golfers, a bit older. Most everyone starts to fade by about thirty. There are, however, a few freaks. One of them pitches relief for the Yankees....

Dozens of Olympians and world champions will toe the line Saturday at the 168th...

After Bernard Lagat competes Saturday in the Fifth Avenue Mile, he plans to do something that would feel completely foreign to many elite runners: He will toss his sneakers in a closet and pig out for the next five weeks. No running. No sit-ups. No...

At 37, Bernard Lagat is still in pursuit of Olympic gold

Time means everything to a runner.

Every step equals another...

With more sub-4-minute performances than at any other U.S. invitational track and field...

NEW YORK - (May 7, 2012) - Nine athletes who have won a total of 26 World Championships medals have been added to the field for the adidas Grand Prix on Saturday, June 9, organizers have announced.

Among them are Jenny Simpson, the reigning women’s 1500-meter World...