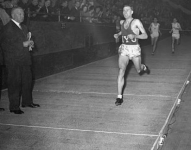 Running is a country boy’s game. Ask any track coach what type of material he prefers. “Give me kids from the country,” he’ll say. He wants fellows like Glenn Cunningham, who spent his boyhood running on the plains of Kansas. Or Joe MeCluskey, the Manchester, Conn., newsboy who slept an hour late each morning, and then covered a 7-mile newspaper route on the run. Or Long John Woodruff, who paved his way to Olympic glory by running several miles to school every day in a hamlet in Pennsylvania.

Yet the best Mile runner in America today was born and raised in the heart of New York City. Except for a few weeks each summer, he rarely has been away from the city pavements. Yet competent authorities pronounce him the fastest runner for his years —he’s barely 21-years-old—that the human race has produced.

His name is Leslie MacMitchell.

Doctors and coaches will tell you city life ruins a runner. Its pavements break down his arches, deaden his muscles and stiffen his tendons. Its smoky air clogs his lungs. Its tension tugs at his nerves. Worst of all are the subways. They tempt him to let his legs go idle. Their bustle & clamor wear him down. Their germ-laden fumes dull his senses, infect him with colds and menace his health.

Leslie MacMitchell spends two hours every day in the subways of New York.

Doctors and coaches also will tell you a Miler doesn’t reach his peak until he’s from 26 to 28-years-old.

At the age of twenty, MacMitchell—only twelve months after his first start in big-time competition—ran a Mile three full seconds faster than legend Paavo Nurmi did in his prime.

Yet MacMitchell did not set out to be a runner. As a kid delivering flowers and selling magazines on New York’s West Side, lie had no thoughts of glory on the boards or cinders. Football was his sport. Runners were clucks who ran around in their underwear.