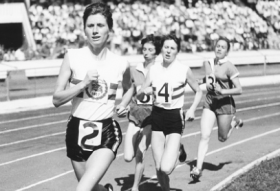 
On May 29, 1954 during the Midland Championships in Birmingham, England, Diane Leather became the first woman to break the 5 minute Mile barrier with a time of 4:59.6 finishing well before any of her competitors. At the time she was a 21-year-old analytical chemist at the University of Birmingham. Because the IAAF did not keep records above 800 meters for women at that time, she was only acknowledged with a world’s best time; not a world record. She had competed in the 800 meters earlier that afternoon.

Leather had only been training for two years when she went sub-5. During her career she had won five WAAA titles between 1954 & 1957 and she also won 4 consecutive national cross country titles (1953-56) as well as three International Cross Country Championships crowns, 1954-55 and 1957. In 1954 & 1958, Diane earned silver medals at the European Championships in the 800 meters.

She was an Olympian in Rome 1960, competing in the 800 meters as Mrs. Diane Charles.

Leather, who was trained as a micro-analyst at chemistry, later became a social worker in London and Cornwall. The legend & pioneer passed away on September 5, 2018.

FUN FACT: Diane was a field hockey player before she became a dedicated runner.

FUN FACT II: She was inducted into the England Athletics Hall of Fame in October 2013.

For running pioneer's legacy, establishment of an award for promising female runners at the school

By Suzannah Rogerson, The Stray Ferret

A school in Harrogate is to honor a former pupil who became the first woman to run a Mile in under 5 minutes.

Roger Bannister and Diane Leather Charles, who respectively became the first man to run the Mile in under 4 minutes and the first woman to break the 5 minute barrier for the iconic...

The world of Athletics is deeply saddened by the news that Diane Leather Charles, the first woman to run a Mile in under 5 minutes and a true running pioneer, passed peacefully on Wednesday, September 5. As...

Many of you reading this blog are aware of the the 60th anniversary of breaking the 4...

Sixty years ago this May, on a crushed cinder track in the Midlands, an athlete ran into history by...

May 6, 1954, might be a date forever etched in history, but just 23 days after Roger Bannister’s barrier-breaking sub-four-minute Mile, a woman made a similar breakthrough.

However, whereas Bannister’s achievement is...