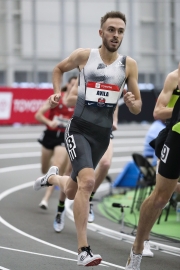 In late February 2019, he finished runner-up at the USA Indoor 2 Mile Championship.

In 2018, Eric had a breakout year. In February, he won the Millrose Games Invite Mile, clocking 3:57.45. At the USA Road Mile Championships in April, he was national runner-up, and few days later, he won the Drake Relays Hy-Vee Mile in 3:58.81. In August, Avila won the Ed Murphey Memphis Mile, shattering the Tennessee state record with his 3:55.43 personal record in a thrilling race. He also finished runner-up in the BBTM Grand Prix Tour 2018 and produced the men's Tour performance of the year.

A Day in the Life: Eric Avila

"We value recovery. If you’re tired, there’s a reason. If you don’t have it today, go home."

Here's a movie pitch for you: A late-blooming high school state champion goes to college, gets arrested, flunks out, labors as a landscaper, gets a second chance, earns...

“My hope is this will be the genesis of things to come. We’ve started a little spark that could grow into a fire — and grow the sport back.” - Jim Ryun

Chula Vista native Eric Avila pointed to the crowd on the homestretch and leaped as he crossed the finish...