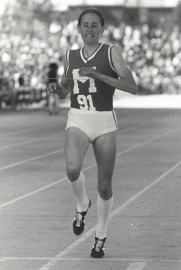 In 1981, she won the silver medal at the World Cross Country Championships in Madrid, and during her career, Merrill set the 5000m world record three times with a PR of 15:30.6 from 1980.

Merrill-Morin has coached at both the NCAA Division I and III levels—including stops at Rutgers University, Coast Guard Academy, Connecticut College and Mitchell College as well as 18 years as the varsity coach at Waterford High School.

The most profilic Nutmegger Miler in state history Jan Merrill set a U.S. Mile record in 1977, was a USA indoor Mile champion and a 1976 Olympian at 1500 meters. On the men's...

One of Jan Merrill's prized possessions is a cartoon she received from a friend last fall. It shows a woman runner, whose severe features...