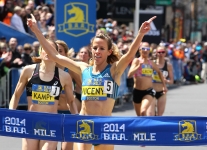 From The Boston Athletic Association

A $14,500 prize purse will be distributed to the top professional finishers in the B.A.A. Invitational Mile. The male and female champions will each receive $3000 in prize money. Prize money awards are equal for men and women.

Uceny, 30, who was ranked first in the world at 1500 meters in 2011, will look to win the fourth B.A.A. Invitational Mile title of her career. Uceny lives and trains in Boston under B.A.A. High Performance coach Terrence Mahon, and broke the finish tape first on Boylston Street in 2010, 2012 and 2014.

Uceny is coming off of a stellar indoor season which saw her set a personal best of 4:29.39 for the Mile in New York City. Uceny won last year’s B.A.A. Invitational Mile in a time of 4:44.0; this year she’ll go for her fourth victory, with Anna Willard’s event record of 4:38.6 within reach.

Fellow Americans Heather Kampf and Gabe Grunewald aim to claim their first B.A.A. Invitational Mile title, both having run the race before. In 2014 Kampf finished a close second to Uceny, while Grunewald was runner-up in 2013. Kampf is the reigning USA Road Mile champion.

Also competing on the women’s side are Ethiopian Dawit Seayum, the 2014 World Junior champion at 1500 meters, and Americans Brie Felnagle, Rachel Schneider and Emily Lipari. Lipari is a member of the B.A.A.

O’Hare looks to continue a strong British tradition at the B.A.A. Invitational Mile, as fellow countryman Andy Baddeley won a pair of titles in 2010 and 2011.

Facing off against O’Hare in the men’s professional race will be Americans Duncan Phillips and Frezer Legesse, as well as Britain’s Chris Gowell. Representing the Boston Athletic Association are Steve Mangan and Dan Lowry.

Following the Middle School 1000 meter races is the Scholastic Mile, which features girls’ and boys’ races for high school students from the eight cities and towns of the Boston Marathon course. The Scholastic Mile follows the same three-lap, USATF-certified course the professional Mile athletes run, finishing at the storied Boston Marathon finish line.