A streak of a different color, sub-5 Miles for 30 years 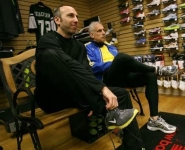 “Running wasn’t very important anymore, but at the same time, I needed it to keep me sane.”

Oh sure, Steve Spence made it into the news for breaking five minutes for the Mile for 41 years straight. Spence, after all is a former Olympian. But he had just turned 54, so it was no small feat to run 4:54 last May.  How about you?  Do you have a fast time that you have been able to hit for several years in a row?

Gary Rosenberg of Morristown, who has been running since he was a kid, began to wonder if he had a sub-5 streak like Spence. He dug into his running logs to see what he might find.

“Now one thing to keep in mind is that 30 years ago I was not thinking ‘Hey, I would like to see how many years I can break five in the Mile,’ which I assume goes for Steve Spence as well,” said Rosenberg in an email.