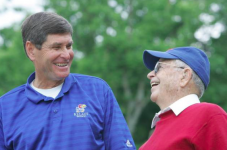 “No, much faster, Jim. I’m thinking national record. Not only that, I’m thinking you can do what no other high school boy has done and that’s to run under 4 minutes.”

Timmons, who guided KU to four NCAA championships and 27 Big Eight titles, was 91.

Known as an inspiring motivator and beloved head coach, Timmons coached the Kansas program from 1966-88, developing a slew of All-Americans and future Olympians. He was perhaps best known for his relationships with Mile legend and teen world record setter Ryun, who ran for Timmons at Wichita East in the early 1960s and later followed his coach to KU.

“He gave each athlete a different challenge,” Ryun said in an interview last year. “He took such a personal interest in everyone around him. He would consistently ask athletes how their grades were or how they were doing outside of school. He was just that kind of guy that truly cared for everyone.”